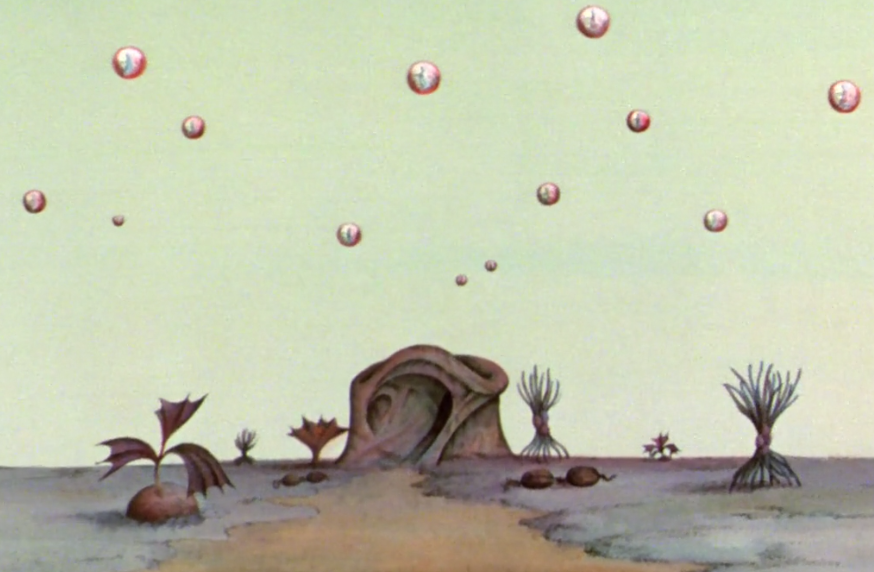 How does a plant survive in a desert that has not see rain for years, maybe decades or even centuries?
This was just one of the topics of the  7th International Conference on Fog, Fog Collection and Dew, July 25 – 29, in Wroclaw, Poland.

This may seem a comparatively small and exotic field of science,
however, an impressive 30+ countries from all 6 continents were represented, with approx 120 participants total. 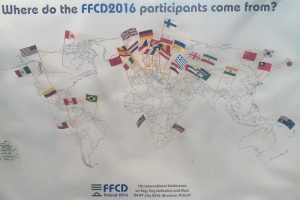 With all keynotes and talks in one single track (a great decision by the organizers – especially for a complete newbie like me), presentations and posters were organized into eight sessions/thematic groups:

So, some study how fog and dew arise, how they can be predicted, modeled – be it in order to avoid negative impact on e.g. air traffic, or to identify areas of potential positive effects on flora and fauna.

Climate change and its influence is being discussed: is there a global decrease in fog? First data seem to suggest that.
Monitoring and sensing of fog and dew, often over long time periods, supplies such data.
Others look at what is contained in fog and dew, how it holds, transports and deploys pollution as well as nutrients.

My personal main interest was in two fields:,

The following notes are my personal highlights rather than a representation of the whole program (find the complete one here), with far too many good talks and posters to mention them all here.

Fog/dew and its interaction with vegetation

This session was opened beautifully by Mary Neely, with a talk on
FogLife: Investigating fog as the foundation of the Namib Desert ecosystem

The Namib Sand Sea, a World Heritage Site, is one of the regions that you might have heard of, if interested in ecosystems depending on (coastal) fog.

Among the Flora of this 2000 x 100 km (roughly) stretch of land,
lichens, phytoliths and shrubs all are known to be influenced by and feeding on fog.
Even animals are able to take in fog.

But while the phenomenon of interaction between fauna and fog is known,
detail studies of plants’ technics and adaptation still are in their early phases,
as Ruusa Gottlieb pointed out in her great talk, The contribution of fog to the biogeography and biology of Arthraerua leubnitziae in the central Namib Desert,

“Some of the other attributes of the plants investigated include canopy properties (leaf area per stem area), leaf foliar properties, the ability to take up foliar applied deuterium-labeled water, tissue elemental concentrations and tissue water, C and N isotopes. Elemental and isotopic composition of the soils along the transect were also measured. Arthraerua leubnitziae was found to use
fog water and nutrients therein. Further research aims at quantifying fog water
use.”

Moving on from Namib to the Chilean Atacama, another popular example of fog-blessed desert, Emelie Pepin gave a fascinating talk on What Plants Can Teach Us About Fog Collection [1].
One of her first slides contrasted human’s “50 year old technology” with plant’s “5 million year old technology” –
yes, plants are ahead of us and we have a lot to learn.
Analyzing the performance of two different Tillandsia species (T. landbeckii and T. mucronae) , their way of binding and absorbing water, she finds these to be without any human technology equivalent.
A Tillandsia can absorb 50 ml per hour and square meter, while losing less than 1/1000 of this at the same time. How they do that?
Through an elaborate 3D design including trichomes (to build large droplets of water) and one-way “valves” made of thin scales (to keep the water inside once it is collected).

The Taiwan Yellow Cypress, Chamaecyparis obtusa var. formosana) faces a challenge quite contrary to that of desert plants – it has to live in extremely humid climate with 340+ days of heavy fog per year. How does a plant breathe when constantly covered in a water film?It hides its “breathing holes” the stomata in hidden rifts, keeping them free even under constant water cover.
Water pollution however might pose a serious threat to the tree.
[Structural and functional adaptations of Taiwan yellow cypress (Chamaecyparis
obtusa var. formosana) to persistent leaf wetness from fog, J. Burkhardt et al.][1]

For those aiming to collecting water – be it human or plant, and the water from fog or dew – obviously you need to optimize the surface that will be exposed to water or humidity. But just being hit by water is not enough.
you also need to transport the water to where it is going to be used or stored,
e.g. into the plants’ body or to a storage tank.

Daniel Beysens’ poster presentation “Improve Dew Harvest with Edges and Microgrooves” [1] showed how both edge effects and microgrooves may be used to optimize the growth of larger droplets, and their transport along the surface. 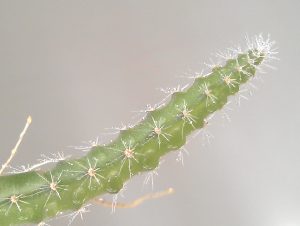 True masters of water transportation are found among cacti.
Many species of this family are known to have elaborate spine structures that allow them to collect and lead water even against the pull of gravity: Dip one of these spines into a drop of water, and you will see how it sucks up the water.
Therefore, cacti are the subject of many studies in biomimicry – the art of learning from nature to design technology. 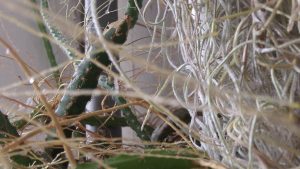 Impressive work was presented by Yongmei Zheng and her group at Beihang University – Bioinspired wettability surfaces to control fog-water collecting abilities [1]
– presenting their work with e.g. spider silk, beetle back, and spines of cacti.
Their 2012 study A multi-structural and multi-functional integrated fog collection system in cactus [2] focuses on Opuntia microdasys and is among the most thorough and amazing examinations in this field.

A remark: Opuntia microdasys has been the subject of several studies, however the genus Opuntia has hundreds of species, and more than 100 of these show this specific kind of modified spine, the glochid, which – apart from being a nasty and painful defense, and a great way to hang on to visitors – has water collection properties. The research journey has only just begun …
And there are cacti genera that have been mentioned in ancient (100+ years old 🙂 ) studies that we have not even looked at.
Another remark: In valuable private communications with Prof. Dr. Wilhelm Barthlott, we discussed the fact that some of the plants examined here, and showing water collection capabilities, might not even be fog or dew collectors in their natural habitat.
Opuntia microdasys is not known to be a fog or dew collector, neither is Ferocactus. Yet the shapes and properties of the plant might allow for these mechanisms. They might however occur as an accidental side effect, a secondary function.
(We could discuss here whether nature and evolution makes plans at all, and if so, in what ways …)

D. Beysens’ 2015 paper “Dew harvesting efficiency of four species of cacti” compares the four cacti Copiapoa cinerea var. haseltoniana, Ferocactus wislizenii, Mammillaria columbiana subsp. yucatanensis and Parodia mammulosa. The winner here seems to be the Copiapoa – no surprise, given that the plant comes form the Atacama desert, mentioned above.
Ferocactus wislizenii’ spines are optimized for doing other things – this species is not really a dew collector.
And, by te way, how does one identify the impact of the spines versus the cactus’ whole body? Easy – you clip off all the spines!
Which leaves you with a somewhat odd-looking plant, but serves the scientific purpose.

So what are humans doing in this field?

Fog nets are probably the most commonly known approach. To give a rough idea, such nets can collect 5 to 10 liters per square meter on a good foggy day.

Several groups reported on their work in this field.

D. Fernandez operates dozens of Fog net stations along the Californian coast, all connected to the (data-) net and reporting statistics like yield etc –
Standard Fog Collector Measurements Along the Central and Northern California Coast during the summer fog seasons from 2009-2015 [1].
The paper compares a number of different mesh nets, such as POSS-PEMA, MIT and the widely used Raschel nets.

Schunk et al. reported first measuremnets of such nets, from a deployment in Morocco [Water yield and quality of a novel fog collector for high wind speeds]. [1]

There were many many more in this section

Fog Collection was reflected upon also in a contribution of a very different kind: 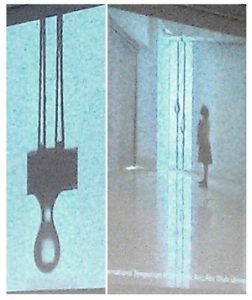 Collecting dew in the desert

Moving from fog to dew, dew collection may be particularly interesting in deserts:
Deserts, receiving little or no water in the form of rain, often show
strong night-to-day temperature variations, leading to significant amounts of dew.

Thus, dew may be used especially where it might be most needed, in very arid regions, to aid (re)greening. 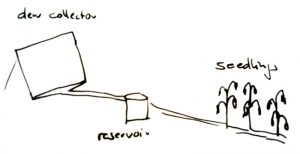 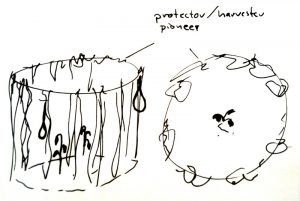 The principle here is quite simple:

Dew that occurs at night, in the morning, due to cooling, is collected and either used directly or stored in a reservoir, to be used when most needed. Interestingly, dew also occurs in seasons of little or no rain.

It can thus help to support pioneer plants that, once grown and stronger, may sustain themselves and help to bind water and help second generation plants.

Dew in the city

Dew collection is not limited to the desert or rural scenarios:
Simon Berkowicz took us the the city, presenting A 10-year analysis of daily dew measurements on an urban roof [1] and D. Beysens et al are “Observing cars to obtain quantitative dew measurements“.[1]

At the end of the conference, the new International Fog and Dew Association (IFDA) was established.

And lastly, you can find the conference related tweets under the hashtag “ffcd2016”.
(Don’t expect too many tweets though – compared to IT or Networks conferences that i typically attend, this was not a very tweeting affair … which may be good: the focus is on natural resources, not social media.)

[4] Schemenauer and Cereceda: A Proposed Standard Fog Collector for Use in High-Elevation Regions, Article in Journal of Applied Meteorology 33(11):1313-1322 · October 1994, https://www.researchgate.net/publication/234254710_A_Proposed_Standard_Fog_Collector_for_Use_in_High-Elevation_Regions

0 thoughts on “7th International Conference on Fog, Fog Collection and Dew – Some Notes”